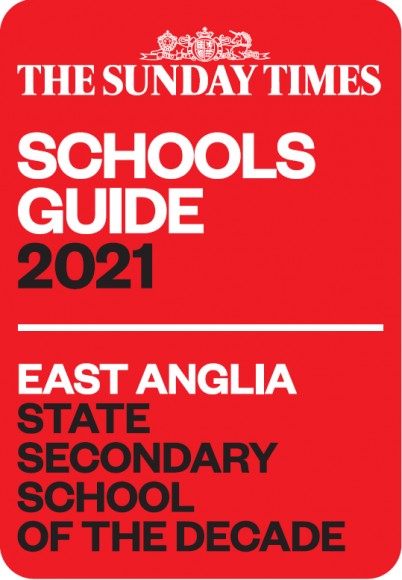 “This award is a testament to the hard work, commitment and dedication of my outstanding colleagues, both past and present, who have changed the lives of so many students that have passed through our historic gates.

We know that the opportunities we have given our students have enabled them to achieve their potential, whatever their background.  It is not an exaggeration to say that former CRGS students around the world are making a real difference in their chosen academic and professional fields.

The unique ethos at CRGS is in no small measure down to the support given by the parents, our governors and the Old Colcestrian Society.”

“On behalf of the Governing Body, I would like to say how incredibly proud we are that our excellent staff and students at Colchester Royal Grammar School have been recognised with this prestigious award.  We offer many congratulations to Mr Russell and all the staff, as well as the supportive parents and hard-working students who help to make CRGS the award-winning school it has become.”

The 28th edition of Parent Power identifies the 2,000 highest-achieving schools in the UK, ranked by their most recently published examination results. A fully searchable national database by school name, local authority, town and postcode, together with regional rankings are available to Times and Sunday Times subscribers at: thesundaytimes.co.uk/parentpower

As well as assessment of all academic results on a school-by-school basis, Parent Power enables parents to compare the performance of a given school with other schools in the same town, local authority or nationally. There are also live links to school websites and schools’ most recent inspection reports.

Parent Power is widely acknowledged as the most authoritative survey of the country’s best schools. The rankings in the secondary school league tables are determined by the percentage of examination entries gaining A* to B grades at A-level (which is given double weighting) and the percentage of entries graded 9, 8 and 7, at GCSE and iGCSE.

Nick Rodrigues, deputy editor of Parent Power, said: “The top-performing school in East Anglia, Colchester Royal Grammar School has been in The Sunday Times top 10 seven times in the past 10 years and is regularly the highest ranked school in Essex. This year a total of 39 pupils were offered places at Oxford and Cambridge, a school with such an exceptional record deserves to be recognised as East Anglia’s school of the decade.

“Colchester Royal Grammar School also offers its mixed sixth form students a rare opportunity, for the state sector, to develop their independence, by being one of the few state schools to offer boarding. In addition to being able to use the gym and utilise smart board technology for their studies, boarders have access to the school’s stunning library throughout the evenings and weekends.

“The school has an exceptional reputation for extracurricular activities and under the leadership of headmaster John Russell the pupils in this boys’ selective grammar gain a range of experiences thanks to both staff and student-led activities. Whether it’s music, the arts, sport or developing skills for future careers this is a school that aims to deliver confident and talented young adults.”

The Sunday Times Schools Guide, Parent Power, was first published in 1993. The guide to the top 2,000 schools in Britain is published over two weekends: primary and prep schools on November 22, followed by state and independent secondary schools on November 29. As well as print sections, there is a fully-searchable online database – www.thesundaytimes.co.uk/parentpower – allowing users to search schools by postcode, town, local authority and school name. All schools are ranked by the latest available public examination data.

RSS Feed
Back to NewsNext Article