Names of the Fallen

‘For the Fallen’ written in 1917 by Lawrence Binyon

They shall grow not old as we that are left grow old:

Age shall not weary them, nor the years condemn.

At the going down of the Sun and in the morning, we will remember them.

The Plaque and Window 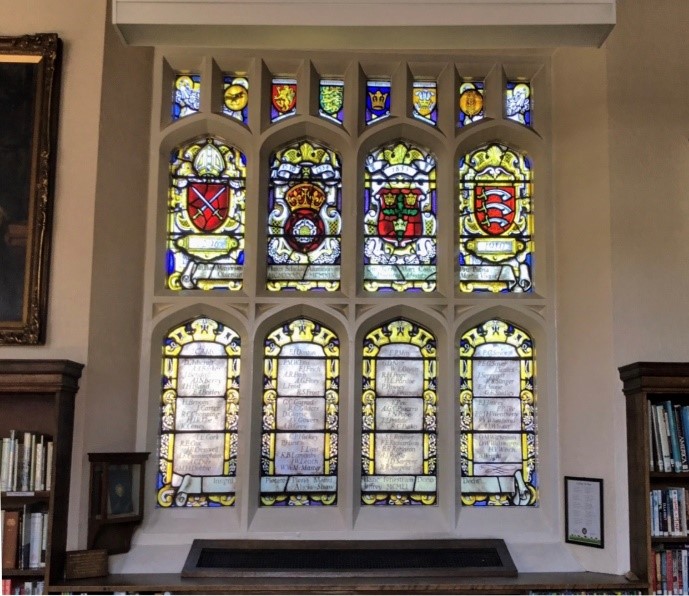 The window was unveiled and dedicated in 1952.  As well as containing the names of the fallen from our school, it includes significant dates in the school's history and the heraldic arms associated with them.  Right at the top are the shields of the four houses of the school. 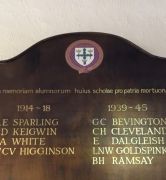 The archives and its volunteers have researched the lives and deaths of the fallen and found some names were missing from both the World War One Memorial in the Hall and this one.  Consequently, there is a second plaque that includes those missing names.

There are numerous memorial gardens throughout the Colchester Royal Grammar School site. The World War 1 memorial behind the George Young Building is in place to remember the former students of the school who fought in the First World War and those who tragically lost their lives. The memorial was made after I myself joined the school, with the metal poppies being planted in 2018 in a ceremony 100 years after the actual Armistice day at the end of the First World War in 1918, many Old Colcestrians attended as well as some people who were relatives of those who had passed years go. All those deaths and the huge impact it would have had on the young men’s families and the school at the time is not something easy to grasp for most today. These students are always remembered on Armistice Day when all their names are read out in the large close as everyone at the school, both students and teachers, are given time to contemplate on the great tragedy suffered during the First World War and reflect on how fortunate they have been in their own lives to not have faced anything that for most does not even comes close to it. The former students’ names are also shown in the hall and the library, so they are seen throughout the year and remembered. This is why it is very much important that the area behind the George Young Building is left undisturbed and is kept as a place for those at the school to sit and to remember.

As well as the World War 1 memorial there is also the memorial next to the sunken garden outside the sixth form common room area and Gurney Benham and the garden opposite the George Young building. In these gardens, trees are planted to commemorate students who died during or after their attendance at Colchester Royal Grammar School. Some of these students have passed away since 2010 and would therefore have been taught by teachers at the school currently and these memorials therefore hold even greater meaning to them. These students were just like any at the school today, they had great prospects with many of them heading off to top universities and most of their life still ahead of them and it was taken away from them in an instant.

None have done better

From the Poem 'To Fall Asleep' by JK Sansom, Year 10, written in 1943 about the former students of CRGS killed in the Second World War.

Be not sorrowful!  For they are always near.

They would not wish for morning, sad and dull,

For where they dwell the daylight is serene.

We do not see them as they were; but in our hearts

Their memories live on, and ne'er will die.

They stand beside us, and encourage us to be

More pure in spirit then they themselves had been.

Be not sorrowful! For Death is but a sleep

From which we wake into a world blessed

From the Foreword of the book None Have Done Better: The lives of the Old Colcestrians who died in the First World War.

They gave their lives that others might live in freedom. They gave

From the Foreword of the book They Stand Beside Us: The Lives of the Old Colcestrians who died in the Second World War:

through a time when their hometown was bombed from the air

with explosives and incendiaries; when many of them lost brothers,

sisters, fathers and mothers; and when the names of those

who had worn the purple blazer, killed in battle, were read out in assembly.

From a poem by Flight Lieutenant Benjamin Robinson (RAF), former CRGS pupil who was killed in a bombing raid over Germany in 1944.

The path of countless ages has been trod

By many a scholar now forgotten, save

For the inscribed tombstone of his grave

(If not already sunken 'neath the sod).

And if these men be now mere names or less,

They've done their share to keep the School alive

And uphold that tradition we derive

From those men in the days of Good Queen Bess;

And we must let our fame be ne'er outshone,

That she may continue to rise in fame,

However, this our work cannot be done